I have a confession to make: I have an addiction — to TED conferences and particularly TEDWomen. While it is not a cheap habit, it is a healthy one as TEDWomen continues to be a nourishing and enriching experience that keeps me coming back year after year. If you have not attended a TED event (which is different from the TEDx events which are independently organized) this conference is much more than listening to talks. Yes, there are 40 talks and performances (nicely curated in a group of five or six around a theme), but there are at least as many conversations with interesting women (and a few men). There are many who come from different backgrounds and from all over the world — attendees that I would be unlikely to meet anywhere else. In three days, I met a philanthropist from Columbia, a High School TEDx organizer, a College professor who is offering a sex-ed class, a serial entrepreneur now working for a university, a successful banker, an insurance CEO and many more. What is unique about TED Women is that conversations go deep fast and that there is mostly an absence of egos, nobody trying to show off how smart they are or trying to sell something. And TED does it right by giving the opportunity for conversations during long breaks between talks, shared activities or simply waiting in line to get into the theater where the live talks are given. 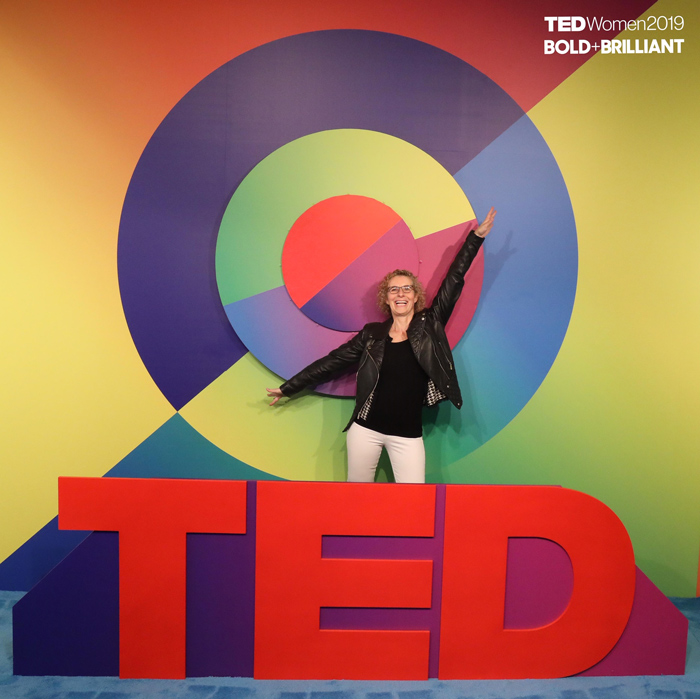 And, of course, there are many ideas worth sharing, but here are my five takeaways from the amazing line up of speakers around the “Bold+Brilliant” theme for this year.

The power of simple yet brilliant ideas and creativity

Four diverse talks came to mind with ideas about helping the elephants to ways to avoiding food waste, dealing with the lack of medical resources in Rwanda to using creativity during the current events in Hong Kong

Three African leaders Ellen Johnson Sirleaf, the former President of Liberia; Yvonne Aki-Sawyer, the major of Freetown; and Agnes Binagwaho shared  their unique stories of the need to take the lead to create the changes required for their countries and how including more women was transformational and helped their countries deal with major crisis like war or Ebola epidemic. As President Sirleaf concluded “we must change the stereotypes and ensure that structural barriers (to women leadership) are removed; we need to work with men so that full gender equality will ensure stronger economy and a more developed and successful nation”.

Giving women more of a voice can help transform the world

Overall TED Women 2019 was very inspiring and I felt gratitude for all these women transforming the world.

I would like to conclude by sharing this thought from Pat Mitchell, an amazing woman who launched TED Women and recently wrote a book Dangerous Woman. “It is time to play the women card, the race card, all the cards, not to play the power game, but for a better outcome”. Hearing all these women I was inspired for action to help make the world a better place. My goal is to use my skills in the social entrepreneurship world to have a bigger impact. I am looking for new ways to collaborate. Let me know if you have ideas, contacts or simply want to talk.

And for you personally, in what ways can you help create a better outcome for all in 2020?