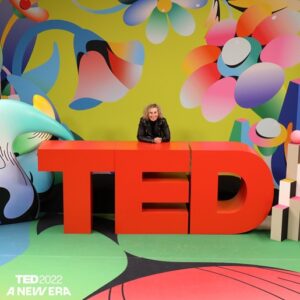 After a four-year hiatus, I felt so lucky to be back in Vancouver for TED 2022 learning from an amazing group of thinkers and doers who are trying to figure out where the world is going in this “New Era”, as the conference was named.

First, I want to share about the experience itself and the strangeness and excitement of being back at an in-person event. After staying in our homes with limited contact with others, being in a group of 1800 people felt both right and weird plus a bit awkward. My brain had to adapt from seeing others as a potential threat to remembering they can be sources of awe and wonder. Feeling exhausted and excited at the end of a day full of interactions was nothing short of amazing.

Why do I go to TED? It is not about the talks themselves (you can watch them on your computer for free, after all), it is about the hundred or so random conversations that you are very unlikely to have anywhere else. We tend to live in silos with our tribes, our family, friends, co-workers, and communities of people like us that work and live in a somewhat similar environment to ours. I don’t want to suggest that TED is very diverse in all dimensions (particularly on the socio-economic aspect of it) but for me, it is an opportunity to have discussions with people as diverse as a painter, a candidate for city council in Texas, a scientist working on AI, a doctor working on better prenatal care and an advocate for early colonoscopy screening.

My field is innovation and I believe that innovation and change at its core require different perspectives and making new connections. That is exactly what can happen from all those random conversations. The TED conference is also about the curated talks. As you watch eight to ten talks on a topic rather than picking them up randomly on YouTube or the TED channel, you can start seeing trends emerge. This year, topics were as diverse as courage, capitalism, intelligence, audacity, vision, wellbeing, play, regeneration, cities, imagination, and awe.

My brain is still processing all that I heard and learned, and writing this article is my way to make sense of this experience and share it. Here is what felt memorable for me from over one hundred talks.

New approaches gave me a sense of awesomeness

The power of “Impact at Scale”

That expression was a great phrase from Chris Anderson, the Head of TED, to summarize many ideas that can be scaled to have a major impact. Here are a few.

There was also bad news and scary realities

For me, TED was a chance to contemplate the best and the worst of humanity. Jeanette Winterson in her talk asked us, “Are we smart enough to survive as a species? Utopia or dystopia is up to us.” Her answer is AI as a way to become a hybrid species. I am not sure about this, but I hope our ingenuity and our humanity will weigh the balance in favor of the human race or if we go extinct, we at least give Earth a chance to survive and thrive.

About the Author: Doreen Patrick