The Relationship Between Improv and Creativity

When I started doing  improv (what many call improv comedy –  but it is actually not always funny) I wanted to explore the relationship between improv and creativity. Coming from the creativity world with a master on the topic, I wanted to see how it feels to “live” creativity by having to be in the moment the whole time as nothing is ever rehearse or planned in improv. 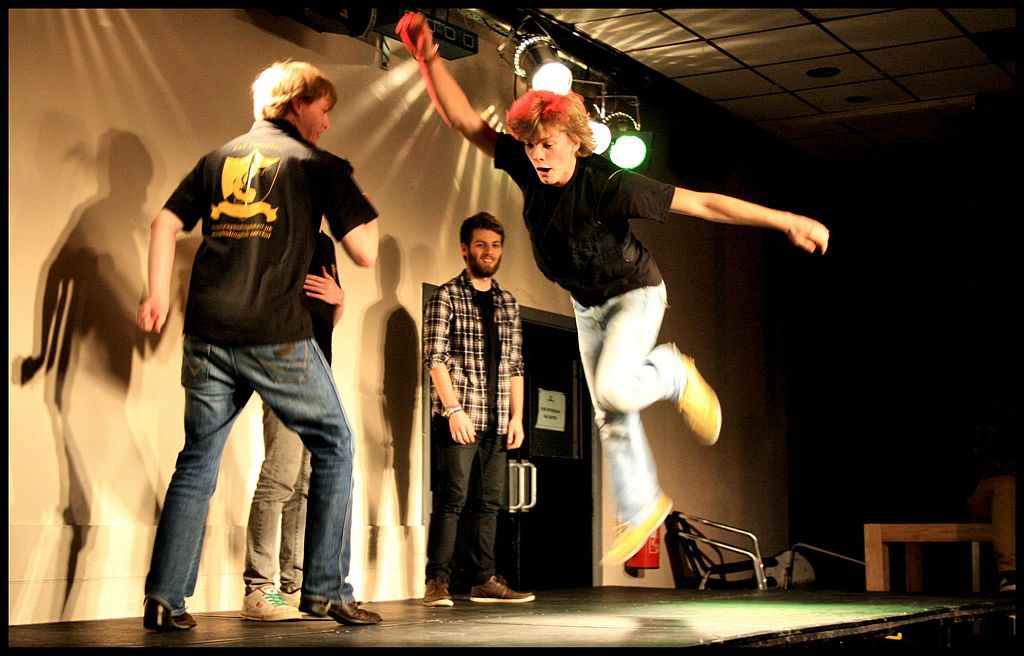 Here are four things I learned doing improv that may apply to your work as well as your personal life.

1. Living the concept of YES AND or accepting the offer

What this means is that when your partner says a sentence or does something physical (what we call an offer in improv), you accept that reality and say “yes and”, or some implicit variation of it when you are more advanced, and built on that offer. For example, if I start a scene with somebody and I move my hand toward them and say “hello cousin” they will do something with my hand (shake it for example) and say something back that acknowledges that I say I am their cousin (it could be saying “hello cousin back” or “it has been a long time”…). What it means is that you accept the reality suggested by your partner and bring something to continue the scene.  The way this translate to creative work is that when somebody comes up with an idea, you don’t say NO immediately and discard that possibility.

This builds on the first point and it means that when somebody says or does something, you suspend your own judgment (thinking it is stupid or makes no sense) and try to respond in a way that makes that action meaningful by bringing new elements to the story. For example, if somebody suddenly throws themselves on the floor, you come up with an explanation that may makes that move very interesting by saying something like “oh my gosh, looks like you have been bitten by a snake, your throat is so swollen” or “I am the only one with the antidote to the poison I gave you, so you have 10 second to give me the combination of your safe”.

In business this translate to being open when somebody brings something new and considering the possibilities that may emerge rather than being annoyed or disconnected.

3. Being in the present

In improv I learned to be and stay in the present and listen intensely. If you are in your head or even try to think of a funny reply it will not work. We are encouraged to start a sentence or have a gesture even if you have no idea what the end of the sentence is or what that gesture may mean. You have to trust that your brain and body will give you something and that it will make sense. For me, it is actually a great complementary practice to meditation and mindfulness by focusing on the one thing your brain or and body gives you in that instant and go for it.

Sometimes the scene goes nowhere or if you play an improv game you miss a rule. For example, you may play the alphabet game where each sentence in the scene has to start with the next letter of the alphabet. So it would start with A, “Alfred, where did you put the gun?” and the reply will be with B, “brought it home and put it in the safe”…Let’s say the next person forgot and to use a C and says “where?”. Then the whole game will stop and the person would throw her arms in the air and says “I failed” and the group would playfully join in as well. Or if it is a scene that is not going anywhere, somebody will say “end scene” and we start the new one. By doing this again and again “failure” becomes a way of life and you can celebrate it, enjoy and move on. In a business situation if you can also celebrate failure (obviously with some parameters around it to minimize the cost) you are more likely to bring more creativity to your work and ultimately solve more problems. Using the design thinking approach, I really believe that failing often and early is the key to minimize the cost and maximize the positive impact of failure.

When I say I do improv, people usually are impressed and think I am courageous and bold. They don’t understand that improv is great for sharpening your creative skills in a way that may transform your leadership and impact on innovative projects. Improv has been part of my life for the past 10 years and I use it in my workshops as a way to demonstrate creativity concepts in an experiential way. It is always a joy to watch participants have fun while learning. And when people remark that they are too scared to try improv, my reply is “that is why you should try”. I hope you will!