Having attended TED for the past 3 years, I am seeing trends about major topics and changes that are happening rapidly in the world with TED being at the front of these trends. Here  is my subjective take on the most fascinating themes from 132 talks during a five day conference. 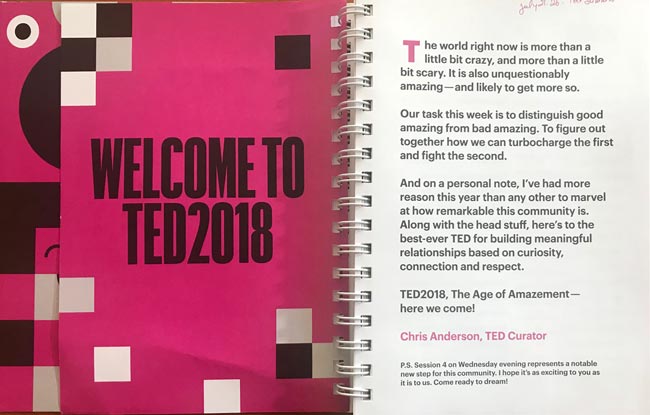 AI is no longer science fiction and will become mainstream in the next decade.

Last year there were several talks about the scary aspects of AI possibly taking over humanity if not controlled. This year there was more of an acceptance that AI is the new reality and that, while it will soon take over many of the repetitive jobs, it may give us a chance to focus on living a more compassionate, meaningful and creative life (Kai-Fu Lee). However, it appears that AI may also be able to infringe in the creative areas for example, with personalized music created by AI based on your story and personality (Pierre Barreau). The most enlightening talk around AI was from Max Tegmark’s  who discussed how AGI (Artificial General Intelligence) can do more than providing physical and biological power and help humanity flourish but only if we can safely engineer AI before it is too late — we have to do it right the first time. This means banning the use of autonomous lethal weapons, ensure that AI generated wealth makes everyone better off and invest in AI safety research to ensure that it is aligned with our values.

The frontier between human and non-human is getting blurry.

Several speakers discussed ways to engineer, restore and integrate into your body parts that are not human. We could become part “cyborg” with the use of bio-mechanics and microprocessors. Somebody with a missing limb can not only get an artificial limb back, but also the neurological sensation of having a limb (Hugh Herr). We may use animal grown organ replacements (Luhan Yang) with genes that have been edited to avoid giving us potential lethal diseases, or using electric stimulation of the spinal cord to allow somebody to rebuild muscles and get feelings back in their legs after becoming paralyzed (Marc Pollock). In addition, with the ability to program and code DNA to create life (Dan Gibson) or create six letter DNA (in nature DNA has only 4 letter) we are changing all the natural limitations of nature (Floyd Romesberg).

The benefits of progress are controversial and Mars may be our best back up.

Some speakers were optimistic, believing that we are progressing in a positive way (Steven Pinker’s talk) and that technology can at least partially address global warming. For example, using the cold atmosphere of outer space to cool down the earth (Aaswath Raman) or detecting and solving methane leaks. From an opposite perspective, Kate Raworth, who called herself the “doughnut lady”, challenged us to rethink the shape of progress, stop thinking about forever growth and suggested that we need to choose a path where we can “meet the needs of all people within the means of our planet”.  Her doughnut shaped model (https://www.kateraworth.com/doughnut/) suggests that the optimum approach is to choose a pace that allow a “safe and just space for humanity” and not overshoot and destroy our planet. And if things do not go well on earth, at least Elon Musk’s SpaceX is focused on going to Mars within a decade so that we can “find another place for human to live and thrive” (Gwynne Shotwell, President of Space X).

Simple ideas can have a huge impact on the life of communities around the world.

This year, TED decided to go beyond the one million dollar TED prize and create the TED Audacious Project Initiative (https://audaciousproject.org/), where seven ideas will be funded through TED and other contributors for a total of $634 million.  Here are a few ideas that are simple yet can be very powerful. 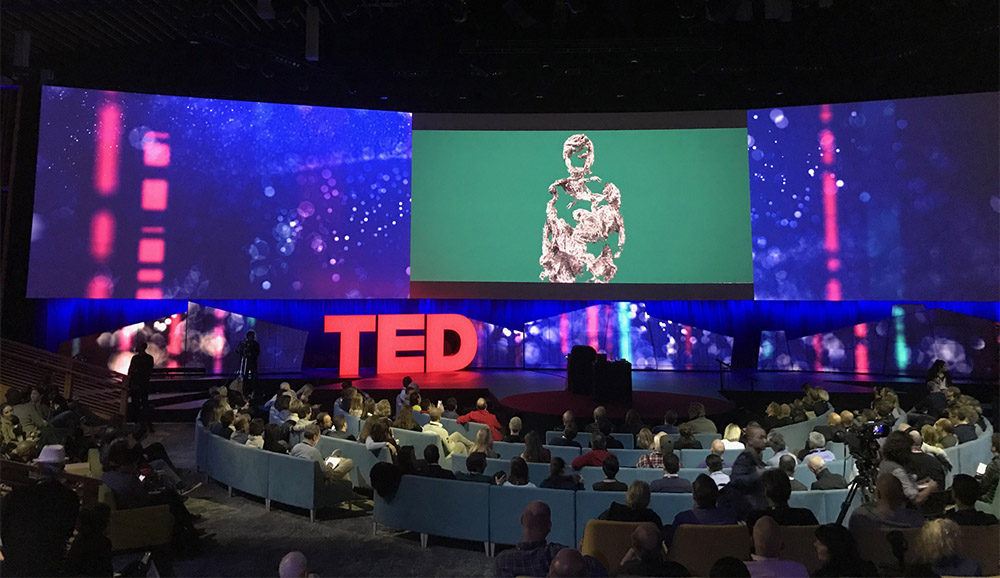 The risk of manipulation and unexpected consequence of technology gone bad seems to be increasing as complexity makes it harder to fully predict and control the impact.

Speakers discussed technologies that can provide better forensic evidence (Simona Francese); soft robots that can help in minimally invasive surgery (Gioda Gerboni); ways to sense and track people so we do not need wearable sensors to detect changes in life style that may indicate health problem (Dina Katabi); and finally the ability to use infrared light to see into deep tissue and detect tumors without the need for an MRI (Mary Lou Jepsen).

If you want to watch these talks, check the TED website https://www.ted.com/ regularly as these talks will be released throughout the year— some filled with hope and some with scary perspectives for humanity. Let us know which talk resonates with you!